A Californian's Final Conclusion about Ticket to Work

I’ve been part of Ticket to Work for nearly two years and have not returned to full or part time work - and it’s partially my fault. The major mistake was not going back to school, as my first case manager suggested.  The other was wanting to go back to work less than a year after having two major surgeries, 16 blood transfusions, and six rounds of “heavy dose” chemo for uterine cancer (which was originally diagnosed as ovarian - and has a lower survival rate).

After giving the second case manager, Carol, the heave-ho, I went online instead of going through the directory that TTW sends out.  The office is always friendly but I figured it was time to think outside the box.  By entering “ticket to work” and “California”, I got some interesting results. 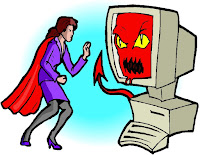 One place not far from me couldn’t decide whether they still offered the service...I’m still waiting for them to get back to me.  Another in Tulare requested my information and never confirmed receiving the documents.  So one consistent name in my search comes up and I decide to go there.

I tell the truth as to why I want to leave my current EN as well as my career goals, the primary being to work at home.  Unfortunately, only the State rehab agencies can sign off on returning to school or job training.

After meeting with about three different people, I get a case manager who’s not only new but claims to have experience in job placement and preparation (a Master’s).  While the first few weekly meetings were okay, it began to feel redundant after a while.

Firstly, I was inundated with resources.  Some helpful but others were generic and best for someone who either never worked or hadn’t worked in two decades.  Then there was a form to fill out prior to every meeting.  Not to mention, Samantha* really had no leads or a real idea as to how I should market myself.

One day, I got a call from a higher-up, Bill*.  It seemed like I was always in contact with the case manager and I wasn’t looking forward to filling out more paperwork or being congenial with someone with no work-at-home leads.  However, the phone meeting was refreshing.


In essence, the system is great for those with long-term ailments but are still functional.  Right now, I don’t have a regular doctor but when I got checked out post-remission,the gyn said I could go back to work anytime.  However, no doctor has been able to give something for the chronic coughing, hirsutism, or fatigue that doesn’t make me extra-groggy or give me nightmares.  So when I’m awake and energetic enough to give myself a lady-shave, cough drops have to be nearby.

However, the catch-22 is that unless a person was near poverty (under $20K/year) before they became disabled, it’s best to take the school route. Most work-at-home jobs pay lower than minimum wage unless the person has a bachelor’s degree or higher.  Through my own research, I’ve found a few exceptions except this isn’t regular employment where taxes are already deducted - weekly hours guaranteed.

Being a 1099 employee while on TTW can go against the employee when more than a year has passed.  Bill told me that while getting back into the program isn’t impossible, it can take a while depending on a number of circumstances.  Yet, if working for even a year makes a difference in livelihood for the moment, the person should just be prepared for the transition.

Bill also said that phone meetings could be stretched out to every 3 weeks.  Samantha and I agreed to meet every other week instead but she threw in a little extra.  In addition to a meeting form, there’s also a job log to complete.  I’ve been on state unemployment and remember what they are looking for.  The problem here is that Samantha wanted a weekly minimum.

The Other Employment
Working for free is not a great area for me.  At the suggestion of others, I have done this a few times in recent, only to come up empty.  About six weeks into our meetings, I told Samantha that I would look into this as a way to gain recent work experience.

The first time I volunteered after leaving my last salaried job and wanting to gain career change experience, the person in charge knew nothing about how press releases worked and only wanted to discuss “ethnic issues”.  Three years later, I got an internship but couldn’t perform as many hours because my school wouldn’t count online hours.  Shortly afterward, my contacts left the non-profit where I worked as a marketing assistant.  I only have the credit on my college transcript.

Samantha and I discussed going this route and I even went into detail as to why one non-profit didn’t work after a trial run (despite having high ratings on VolunteerMatch.org).  So I land several non-paid opps (because who would turn down free work), I’m reporting everything and even keeping up an active LinkedIn profile.  Yet, there’s this constant...dare I say it...nagging about looking for a job.

Honey, if I didn’t want full-time work, I wouldn’t be having these (phone and email) conversations every week.  A lazy person would just nod and go back to watching Springer.  After asserting myself, things had changed...though not necessarily for the better.

As I navigate through many tough waters, all I can do is turn on my sensors when danger is ahead.